“It’s always spoiler season!” is a common refrain in our community. As a person who wants to stay informed on the game I grew up playing, the frequency of new set releases can be overwhelming. However, as a content creator and professional player, I look forward to there always being new challenges.

I’ve been focused on Standard and haven’t played much of anything else, but I did check out the handful of new cards we got an early look at from the new Innistrad set: Midnight Hunt. A couple of them are worth a closer examination. 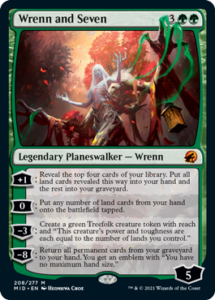 This is a unique and interesting card. We haven’t had many planeswalkers in the past that reward decks with high land density. This card may have been incredible in the days of Uro, Hydroid Krasis, and Field of the Dead. It generates card advantage and can ramp up, but right now it’s likely it’ll just be a playable card.

I don’t think this card will play much of a role in Standard, as we don’t generally see traditional ramp decks in Standard these days, and we don’t have enough big mana sinks right now for it to enable.

This card seems like it could play a role in older formats in decks that have high land density, like Amulet Titan, Scapeshift, and potentially Legacy Lands. Those lands are forms of interaction on their own in many cases. 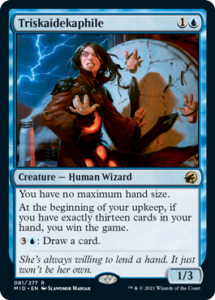 While this card is cool, flavorful, and playable in something like Limited, it is underpowered for Constructed play. I’m sure there’ll be the occasional fun screenshot with the card, but it’s not a card I’d expect to see as a value engine in a control mirror, as it’s just too fragile and slow even in the best circumstances. 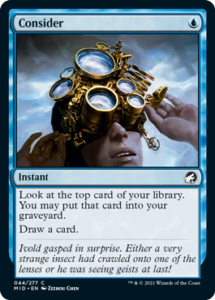 So Opt may be obsolete after the printing of Consider. Having access to the card you want to put on the bottom of your graveyard is better for a variety of reasons. That said, I welcome this powering up of a card that was played in high numbers even without the change.

This is a subtle change that adds an acceptable amount of game variance. It’ll be awesome when you mill your Arclight Phoenix with this, and your opponent will wonder how you got so lucky. You can’t set this up in a way that’s meaningful like Faithless Looting. While this card is power creeped, it’s not to the level that it’s changing the game. It’s only adding to a card that was otherwise just good enough to keep up. I like this card and think it may see play in most formats. 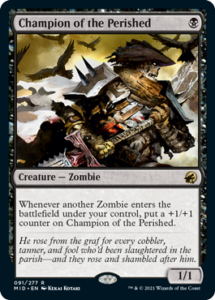 CHAMPION OF THE PERISHED

This is the card with the highest ceiling I previewed. This card has the potential to give zombies a big boost as a high-impact one-drop. While this card will likely struggle to find a home in Standard, as there’s usually an issue finding enough zombies to make a linear archetype like that playable, it seems like a card ripe for Historic or Pioneer. Formats where a card like Dark Salvation or Crypt Breaker can keep up with other decks. Black gets access to its own disruption with cards like Thoughtseize or even Tidehollow Sculler in some formats.

There’s a good chance zombies are stuck in purgatory forever and never really break out, but the more they print cards like this the better chance we have to see it break through and be a real archetype again. 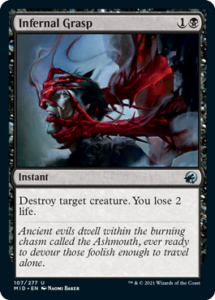 This is the most interesting card we’ve previewed. It looks incredibly strong, but I think this card will see less play than removal like Power Word Kill. Infernal Grasp’s two life cost may seem like a small price to pay, but as games develop, the cost of life will be more punishing if you’re not playing a deck that has access to tons of lifegain. This makes Infernal Grasp a punishing card when drawing from a controlling deck, but an excellent option for black aggressive decks that close before the loss of life piles up.

This card may look like a slam dunk, but we’ve seen cards like Anguished Unmaking and Murderous Rider have problems in slower decks because of how much the life loss ends up hurting. For that reason, I’m a bit lower on this card than others. It will definitely see play in most black decks but maybe in smaller numbers to prevent drawing too many. I think it’s unlikely this is the format-defining removal spell. 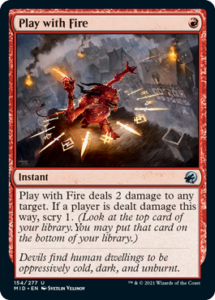 Some people were annoyed with improved versions of both Opt and Shock. Play with Fire is a strictly better Shock and, yet again, I’m here for it. The upgrade is negligible, and Shock is a card that sparingly saw play.

However, I’m a sucker for adding modes to weak cards to help them do something different. Turning my Shock into a way I can make my extra land drop or dig for my only out is a needed improvement on a card that was never that good to begin with, and they can do more. Print Lightning Bolt for all I care. I like when spells get better because they lead to more interactive back-and-forth games instead of snowballs rolling down a hill at top speed. This card hasn’t changed to make it more or less desirable than Shock would be, so again, I’m all for it. 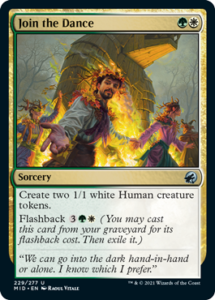 This is the last card I see that’s officially previewed right now. It’s a neat card that might see some play, but the most exciting thing is the return of Flashback. Flashback is one of my favorite mechanics, and while I expected it to return in Innistrad: Midnight Hunt, I’m glad they didn’t change it to something else.

Join the Dance could find a home in a deck like Selesnya Tokens, but I expect it to not see much Standard play without some incredible support for an unsupported archetype. The one spot I think is possible for this card to show up is a Historic Humans deck with Thalia’s Lieutenant, but even then it’s a stretch because it’s both underpowered and not a hit off of Collected Company. Realistically, this is just a cool Limited card.

That’s it for what’s spoiled so far. I think they’ve done a good job, as they’ve managed to power up some weaker cards without pushing too far. Innistrad was one of my favorite Limited formats, and Shadows Over Innistrad was one of my favorite Standard formats, so maybe the stars align this time with Midnight Hunt and we’ll get a bit of both. I’ll be keeping an eye on Innistrad: Midnight Hunt as more of the set’s released, but for now I’m getting back to work on Bonecrusher Giant Standard.