Hello everyone and welcome back on 95mtg.com!
Last week we had a first look at the new set coming on April, 14 on MTGA and in physical stores on the 23rd: Strixhaven!
We discussed about lore, what new mechanics we will have and about some cards that have potential for constructed formats.
Today we will try something different: I’ll make some predictions on what cards from Strixhaven could represent a good investment and what might not. 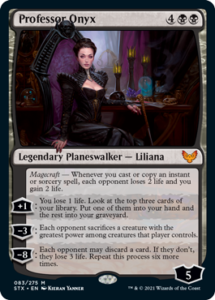 PROFESSOR ONYX: if you’ve read my article from last week, you’ll know how unexcited I am about this Planeswalker.
As we all know, the price of a card is often influenced by its playability in other formats beside Standard; this one doesn’t strike me as a Planeswalker that could find much room in Modern or Legacy. Its cost is too high for the aforementioned formats and its impact, barring strange combos, seems really weak to me.
Maybe some weird combo (with cards like Chain of Smog) played in Commander could make this card worth more.

I believe that its current price is not too high, but I would not be surprised if it will go down again, to settle then on 10$. 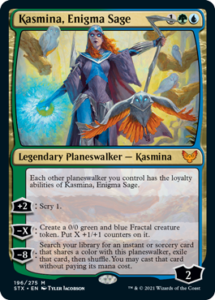 KASMINA, ENIGMA SAGE: when I saw the price of this card I was very surprised, because the more I read it, the less I see a future for this card in any format.
In the best case scenario, we can cast her on turn 3, use the scry 2 ability to take her to 4 (which is a terrible turn 3), and the next turn we can create a 3/3 and leave Kasmina with a single loyalty counter.

12$ dollars are really too much for something that I think will be unplayable in any format. 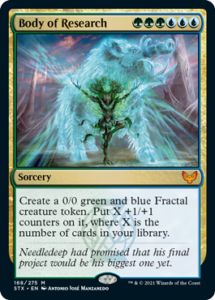 BODY OF RESEARCH: a fun card for sure, creating a 40/40 token is something everyone would enjoy.
Maybe some Fling-combo will come out, but for now this card is postponed.

In short, I don’t think this card can be 6$ worth, even despite the fact of being a mythic rare. 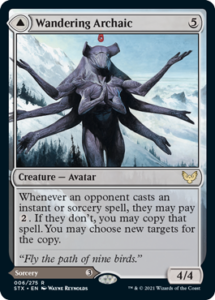 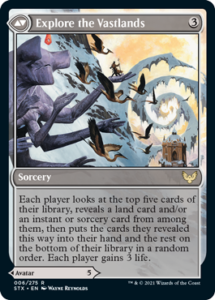 I am very perplexed as this is definitely not a bad card, but I doubt it can find space at the moment. Maybe post rotation everything will change.
I don’t find the $7 price for a rare of this type justified, I think it will settle around $2-3.

…AND WHO GOES UP 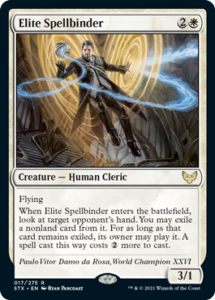 ELITE SPELLBINDER: I have a lot of confidence in this card, I’m pretty sure it can have almost the same impact that Skyclave Apparition had, and that I think will be also true in terms of price (the Apparition was around 3-4$ at first, now it’s around 13$).
Elite Spellbinder, in my opinion,  is a very good card in Standard and, despite the presence of Sin Collector, I am sure it will see play in modern too.

Having a 3/1 flying creature for three mana is already a good thing, removing Extinction Event from our Opponent’s hand can be decisive. I wouldn’t be surprised if this card will be played in the entire four copies by cutting Apparitions, which would then be moved to the side. 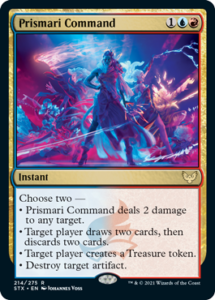 PRISMARI COMMAND: I think I’ve already said so much about this card in the previous article about Strixhaven, I think it’s fantastic. I’m sure it will allow an already strong archetype that has been into the oblivion as UR Control to return to be a tier 1. A card of that versatility can easily find a place in a deck.
The premises to be a staple card are all here, I don’t exclude that it can find a place in Temur Adventures which has just come back in vogue.

Post rotation I think its value can only increase. I wouldn’t be surprised to see it get to $8 and then end up like Kolaghan’s Command. 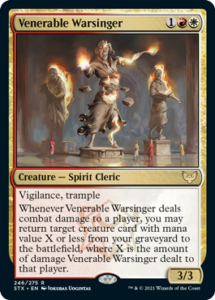 VENERABLE WARSINGER: another excellent card that is currently too cheap, in my opinion. A card that reanimates creatures from the graveyard in aggro is always a great thing. The fact that it has trample makes it much more interesting, as even reanimate a one-drop could be significant value in many situations.

2$ are too few for this card, despite it is a rare of two specific colors. I’m pretty sure it can double its value. 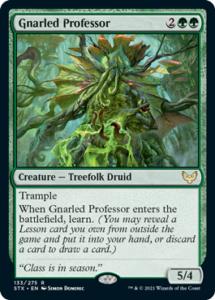 GNARLED PROFESSOR: this is the card that probably surprised me the most for the price that currently has. 1$ for such a card seems a bit low to me; a 4 mana 5/4 trample creature that can provide you with one card from your sideboard when it comes into play?
At first it will struggle to find space simply due the fact that Questing Beast already exists as a 4-drop but post rotation, if Mono-Green will be a viable deck, I’m pretty sure this card will be played.

Even if it can make it to 2/3$, it would still double or triple its current value.

Spoilers from Strixhaven are now complete and this set looks more and more promising. We need to wait just a few more days and we will finally start drafting the new universe of Strixhaven, I can’t wait!
Tomorrow, here on 95mtg.com, we will start the analysis of all the colors for the Strixhaven Limited format, so stay tuned!