Dominaria United is upon us!

Original Dominaria was one of the most fun sets in recent memory. While the Standard format was a bit cursed, I enjoyed the world of Teferi battling Chandra with The Scarab God entering the fight later on.

Dominaria had kicker, one of the greatest Magic Mechanics of all time, which we see with Temporal Firestorm. 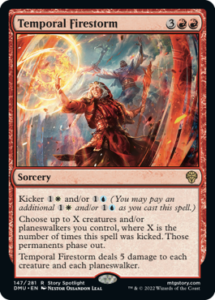 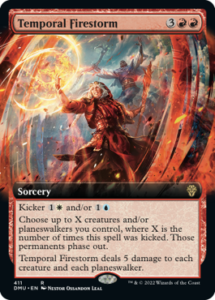 Temporal Firestorm is an updated version of Hour of Devastation with a kicker bonus. Unfortunately, we have a better updated Hour of Devastation already—Burn Down the House. The Burn Down the House’s ability to also play as a threat makes it the more versatile, and likely much better, card unless you have some fun tricks to phase out a planeswalker or creature. Something like Hinata could utilize this while protecting itself.

One of the biggest surprises from Dominaria

One of the biggest surprises from Dominaria was the return of Llanowar Elves. We had long been taught that it was too powerful for Standard, and while that was true in some ways, it was overstated at the time.

While we haven’t seen such a thing from Dominaria, we have seen Llanowar Loamspeaker.

In general, most mana dork that cost two mana are pretty bad for Standard. They force you to play more four-mana cards to make use of them, and they’re vulnerable to all of the format’s removal. Lanowar Loamspeaker, however, looks perfectly power-balanced to break into Standard as a two-cost mana dork.

Three toughness is huge, as it survives a lot of shock-like effects. While the format has Strangle at the moment to also keep it in check, it will put a lot of pressure on Voltaic Surge, my previous favorite one-mana red removal to hit the four toughness threshold.

Loamspeaker not only mana accelerates, it also taps for any color mana, which makes it strong for mana fixing in three-color decks along with our Triomes. On top of that, Llanowar Loamspeaker turns lands into threats and makes life difficult for planeswalkers. Normally, it’s fairly safe to play a walker into a mana creature because they don’t hit very hard—not the case with Llanowar Loamspeaker in play.

I think this card will have an impact on Standard, at least early after rotation.

Shivan Devastator is a fresher look at Shivan Dragon

Shivan Dragon is one of if not the most iconic MTG cards of all time. As a kid it was the card I wanted the most, but mostly because of how cool it looked.

Shivan Devastator looks a bit underpowered for Standard. Its Mythic rarity confuses me, as generally a card like this would be a bit more pushed. I’m almost positive this will see some amount of Standard play since that’s been true for almost all versions of this kind of red dragon. Thundermaw Hellkite, Stormbreath Dragon, Glorybringer, and Goldspan Dragon have all been pillars of their respective Standard formats. The flexibility in this card on the curve may just push it into good-enough territory. 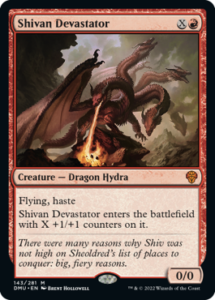 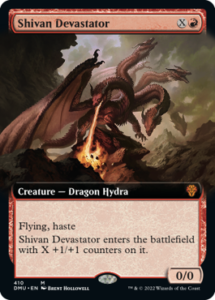 While I’m not super-high on this card, I think it will find a home, at least early in the new Standard format.

While we’re on red Mythics and iconic cards, Teferi, Hero of Dominaria was the most iconic card from Dominaria when it was released. Sadly, Jaya Ballard got not no love.

Jaya is back, though, and looks to be much improved. 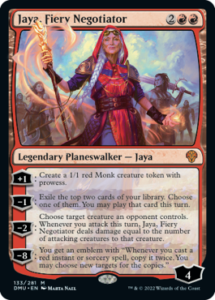 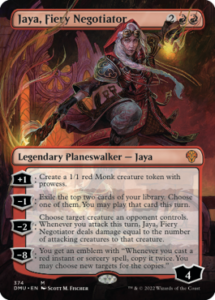 Jaya, Fiery Negotiator looks like a lot of fun and is right at that sweet spot on power level.

In general, killing a creature with it can be a bit tricky of an ability to use because it’s counting the number of attackers, but you activate it before that number is solidified. You could attack with four creatures to kill a four-toughness creature, but if one of those creatures dies to removal before it attacks, this ability will have been used but won’t do enough to kill its target. However, this does make the ability good at taking out big blockers, especially if we’re to see yet another version of Baneslayer Angel like we did with Lyra Dawnbringer in Dominaria.

Giant lifelinking first striking angels have been the bane of aggressive red decks, so I’m expecting to see some version of Lyra Dawnbringer or Baneslayer Angel return with Dominaria United. This ability could be a way to make sure that when you have a massive board it’s not held in check by a giant lifelinking blocker.

Jaya will play best in decks like Red Deck Wins with tons of small creatures and burn spells, and Jaya is at the top end to make the most of its abilities. That’s not to say you can’t play it elsewhere. As it’s difficult for the opponent to remove, it’s the kind of card that can run away with the game, just not as efficiently as Chandra Torch of Defiance.

I think Jaya will see play in Mono Red and two-color aggressive red decks, so not quite a format staple. If I miss on this card, I think I’d be underestimating it because it has a lot of relevant text. Jaya is certainly one of the cards I’m eager to try out as soon as Dominaria United is released in preparation for the World Championships.

The last preview card of Dominaria United is a call back to Figure of Destiny. 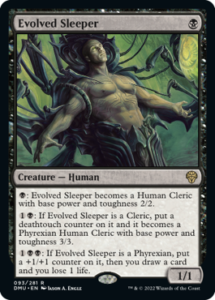 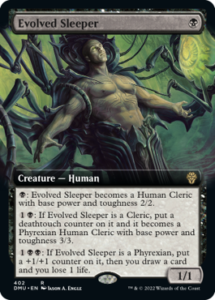 Evolved Sleeper is a solid one-drop that continuously evolves into a better version of itself. Kind of inspiring when I say it like that, don’t you think?

Evolved Sleeper is a card I’ve seen a little buzz about, but it seems a bit lackluster. The floor on cheap threats is low, but this just dies to everything and asks you to invest tons of mana into it before it becomes anything special. You need to be fairly heavily into black because it’s a black one-drop that asks you to keep sinking black mana into it almost every turn, while it doesn’t ever get out of range of any removal.

I expect a lot of people in the first week to try and find a home for the Evolved Sleeper, but unfortunately I don’t expect it to find a home.

When cards like this are good, Magic tends to be a lot of fun, but the game has outgrown cards like Evolved Sleeper at a competitive level.

Our first look at Dominaria looks promising. I’m excited to see more of the set as it’s going to be the focal point of what Worlds will look like, and I plan to go hard in my exploration.

I have a feeling we haven’t seen the best of what’s to come, so I’ll be keeping my eyes peeled.