Hello everyone and welcome back on 95mtg.com!
Last week we jumped into the Commander format, now let’s get back to the “Competitive” world, taking a look at the new upcoming set that will be released on MTGA on April, 15: Strixhaven!

Strixhaven is the most famous university in the entire universe of Magic where five colleges, founded by the five Elder Dragons, confront on each other and learn the most powerful magical arts from the best professors, to achieve primacy within the school!

Shadrix Silverquill is the founder of the college of eloquence, represented by the colors black and white and has an inkling as mascot: a small black creature made of magic ink.

Galazeth Prismari is the founder of the college of elemental arts, represented by blue and red and with an elemental as a mascot, of course.

Peladros Whiterbloom is the founder of  the college of essence studies, it represents the colors green and black, and has pests as its mascot.

Villamagus Lorehold is the founder of  the college of archeomancy and represents white and red. Spirits are its mascot.

Tenazir Quandrix is the founder of the college of numeromancy, represented by green and blue. It finds in a fractal, a creature with geometric shapes, its mascot.

As in every new set, there are new mechanics to analyze. Strixhaven is a school for wizards, so couldn’t we have keywords like learn, lesson, magecraft and ward?
Let’s see them one by one. 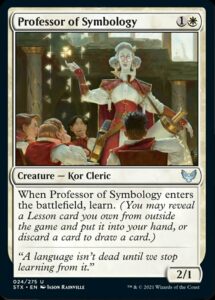 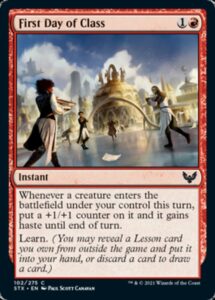 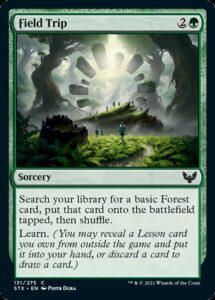 The first new mechanic we have is, in my opinion, the strongest one: Learn.
When we play a card with this ability, we have two choices: we can discard a card to draw another one, which of course it is very strong both in limited, where we can easily cycle a land to find an useful spell, and in constructed formats, where the card quality is always a very appreciated thing.
We can also choose to take a Lesson card from outside the game and put it in our hand, a sort of Cunning Wish for nostalgic people. 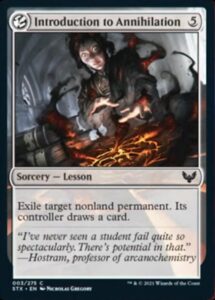 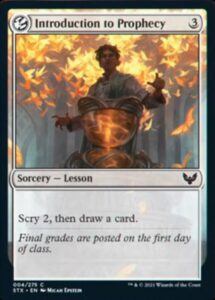 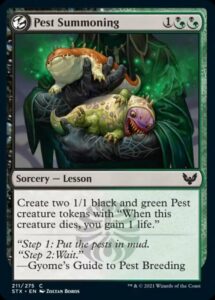 As we said before, everything is set in the most prestigious school in the Magic universe, so there will be many different lessons, which best suit each college, from Pest Summoning to the first bases of arcanochemistry of Professor Hostram with Introduction to Annihilation.
Lesson is the new keyword that we find associated with both sorcery and instant spells; they are also the cards the learn mechanic refers to. 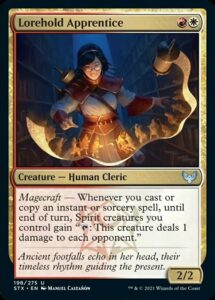 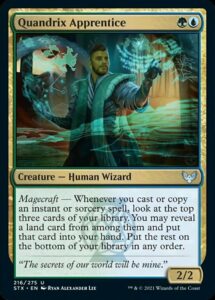 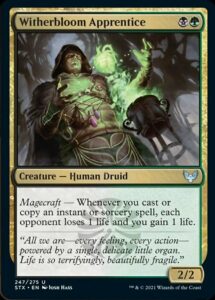 Magecraft is an ability that triggers when we cast or copy an instant or sorcery spell.
Again, each college has its own apprentices and so each of these will do different things: Witherbloom Apprentice will drain 1 life every time this ability triggers.
Lorehold Apprentice, on the other hand, will allow our spirits to be tapped to deal 1 damage to our opponent. 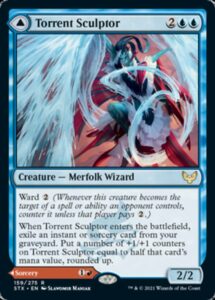 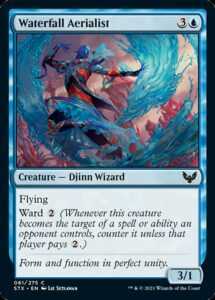 Another triggered ability that will make our opponent to pay more mana to not get the spell that target a permanent with the Ward ability countered.

After seeing the new features that Strixhaven will brings with it, let’s see what are, in my opinion, the most interesting cards spoiled so far and let’s see if they can have an impact on the current standard metagame! 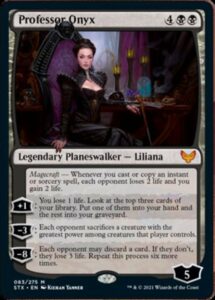 Liliana returns as a professor, with a six mana Planeswalker!
Starting from War of the Spark we have seen planeswalkers with static abilities in addition to their effects.
This Strixhaven Liliana has Magecraft, which will drain 2 life every time we cast or copy an instant or sorcery spell, and this definitely gives this card an edge.
On the other hand, I’m honestly not that excited about this card and if you think about the comparison with the other six mana Liliana, the comparison is merciless. 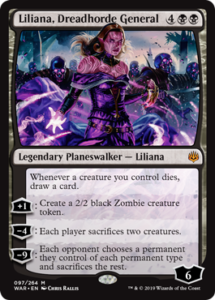 The big flaw of this card is that it will never be able to defend itself, except if the opponent has only one piece on the board and then with the -3 ability it will be able to do so.
The final ability, like almost all the finals, is obviously very strong.

It will probably find a place in some control deck like Blue-Black in a couple of copies because of its magecraft ability. 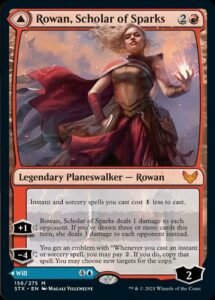 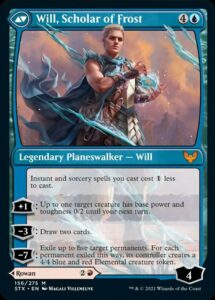 Two faces, two Planeswalker!
Again, we find a static ability that makes all our instants and sorcery cost 1 mana less to cat, not bad at all.

If the Rowan part doesn’t tell me anything (it seems too weak to me, with a +1 ability that does basically nothing and a -4 that you will never be able to use, the Will side seems very interesting instead.
As mentioned before, strong planeswalkers have always been those that can defend themselves and this one does. True, he also defends himself from a single creature, but he does that with his +1 so, unless the situation is already quite complicated on the board (where we would opt to do something else instead of casting Will), he should survive without too many problems.
The -3 is very strong, in fact, in the worst case scenario, at 5 mana we drew 3 cards and forced the opponent to attack him instead of us. 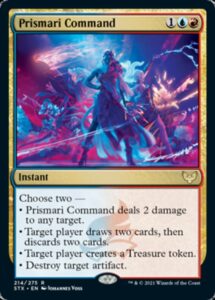 In my opinion the most interesting, perhaps along with the Witherbloom one, among the Strixhaven Commands released.
It reminds me of Kolaghan’s Command although I think it is a little worse.

For three mana, at instant speed, we can either deal two damage to any target (so cheap removal), draw two cards and discard two (so card quality) or smash an artifact (like Embercleave, The Great Henge and Maul of the Skyclaves above all), or create a treasure to accelerate our mana.

In short, a very versatile card that we are happy to play in more than one copy. Will it make the return of unplayed archetypes like Blue-Red/Jeskai Control? Probably. 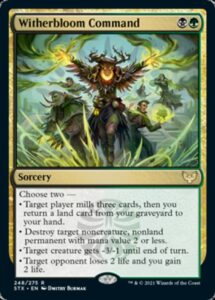 Here it is, the Witherbloom Command I mentioned earlier.

A particularly interesting card, especially for third option, which could improve the matchup of some decks like Sultai Control against Mono-White Aggro, as it can kill Seasoned Hallowblade, that used to be a big problem. The other choices are not to be thrown away anyway.

Will this card allow other archetypes to exists? Can Jund Midrange or Green-Black Adventure return to be a valid deck choice? Difficult, but the potential is there.

The premises for a nice set are all there, the setting is the icing on the cake.

The variety of cards given by the five colleges and the new mechanics can have a big impact on the current Standard, while also providing a very enjoyable limited format.
I can’t wait for April 14th to start drafting and discovering all the Strixhaven cards!

That’s all for today, stay tuned on 95mtg.com to not miss any further content, I’ll see you next week with a new article!

Venturing into the Forgotten Realms

My Adventures in the Forgotten Realms

Try to Escape from the Dungeon!