This week I was planning on going over the full previewed set from Kamigawa: Neon Dynasty and picking some favorites or interesting cards. However, I couldn’t help but notice just how many solid and potentially great cards Mono Red got.

For years, Mono Red lacked a good enough one-drop. I spent a quarter of last season registering Fireblade Charger and Hall Monitor. While Mono Red no longer gets access to Embercleave and Bonecrusher Giant, it now has a lot of options on the cheaper side thanks to Kamigawa: Neon Dynasty.

Let’s look at some of the cards from Kamigawa that could make Mono Red good again. 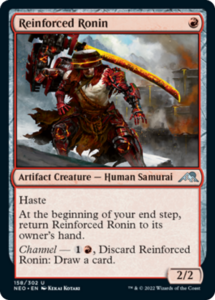 A 2/2 with haste for one mana that comes back to your hand every turn isn’t exactly busted. It does a few things for a red creature deck that wants to play to the board and deal damage as fast as possible.

Its channel ability is essentially cycling, allowing you to replace it if it’s run its course.

Also, like many other cards we’ll see, it allows you to construct your deck so you’re not weak to sweepers, as you’ll always have this left behind to deal some extra damage. 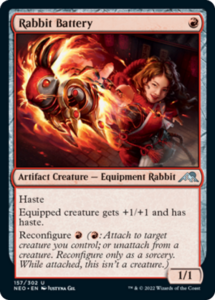 Oddly, this might be the card I’m most excited by for a red aggressive creature-based deck. It’s a one-drop that will never expire as long as it’s in play. If your opponent plays something to block, jump it over to something else. If the equipped creature dies, then you still have this in play.

Reconfigure protects from sweepers by loading up on one creature and presenting your opponent with difficult-to-interact-with board states. Later in the game Rabbit Battery makes all your threats potentially haste-threats.

Cards like Magda or Moonveil Regent, which you may want to play in these low curve, beatdown decks, will be even more threatening with Rabbit Battery in play. 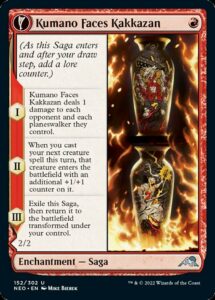 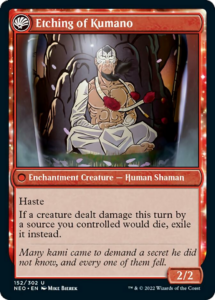 Kumano Faces Kakkazan is a tough card to evaluate. In a deck that wants to play a lot of low curve creatures, this can boost your turn two plays while giving you a small haste threat on turn three allowing you to quickly flood the battlefield.

In a strictly goldfish scenario, this card is efficient. However, your opponent will be playing cards too, and a 2/2 that attack on turn three while you’re on the draw isn’t that exciting. However, this small creature can be modified with various cards like Rabbit Battery and Lizard Blades to make it more of a threat.

This is part of the puzzle, but I’m more excited about what Rabbit Battery can do for Mono Red or other aggressive red decks. However, Kumano is certainly a strong one-drop.

Fable of the Mirror Breaker // Reflection of Kiki-Jiki 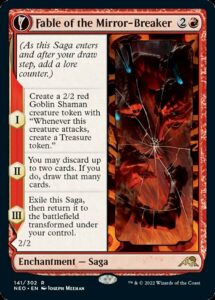 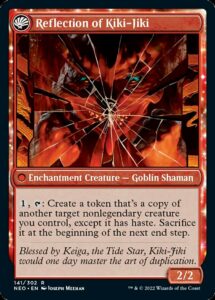 This is three mana for two 2/2s that both have incredible abilities. In addition, there’s a card filtering chapter two to boot. Both of these creatures would be much better with haste, which is something red does extremely well.

Between Rabbit Battery, Reckless Stormseeker, and even Goro-Goro, Disciple of Ryusei, it’s easy to give red creatures haste to push these 2/2s a little more.

Red, especially Mono Red, has a ton of options for three drops between this, Relic Stormseeker, and Chandra, Dressed to Kill, which is a big incentive to be Mono Red.

While I don’t think you can play four of each of them for certain, there’s likely room in a 75 for all of them depending on how you want to configure your deck for whatever the metagame shapes up to be. 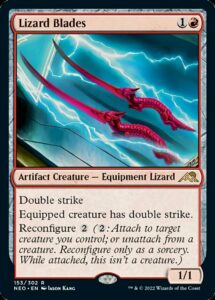 I wasn’t super high on this card until I saw the rest of the low curve creatures that could potentially be added to a red aggressive deck.

Equipping this to Rabbit Battery or vice versa is going to pack a solid punch.

While it may seem expensive to equip and reequip in red between potentially playing Magda, Fable of the Mirror Breaker and even Goldspan Dragon depending on how high you want the curve to be, red gets access to some extra mana to make things tick. 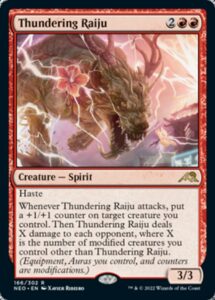 This is a nice four-drop that in many cases will be a 4/4 haste the turn you play it and continue to grow on its own.

Some added damage from its trigger is fine, but it’s an exciting prospect because it keeps growing on its own.

This is an excellent follow-up to Lizard Blades as the counter gets more potent on a double strike creature, and it’s also an excellent creature to copy with the Reflection of Kiki-Jiki.

This card ties the whole equipment shell together with Rabbit Battery and Lizard Blades.

Wow, do these cards work well together!

Turn one Rabbit Battery, turn two equip this, even if the battery trades or dies to a removal spell, and now your Eater of Virtue gives Haste.

Play a turn three Lizard Blades, give it haste, and attack for six. If it dies your Eater of Virtue will exile it and give future-equipped creatures double strike. This card looks incredible in that shell.

Eater of Virtue is legendary and a bit of a problem as it’s not quite the card Embercleave was in that you win when you cast it.

That said, you can afford to play more copies if you’re playing Fable of the Mirror Breaker to filter it away. I’d think three with Fable and two without is likely correct. 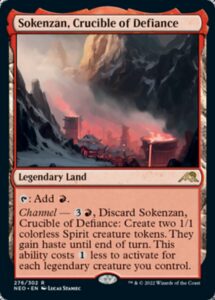 We talked about this one last week, but as a reminder, this card is worth playing a copy or two of in a deck that’s playing a lot of equipment.

The fact it’s legendary makes it a little less appealing to play a ton of, but the deck will make great use of the tokens. Also, Faceless Haven being banned leaves room for more Shatterskull Smashing and Den of the Bugbear.

In the first paragraph of this article, I made fun of myself for playing Fireblade Charger at League Weekends and Set Championships. With these awesome new equipment and reconfigure cards, Fireblade Charger might be back on the menu.

We’ll have to see how the format shakes out, as Spikefield Hazard, one of my least favorite cards in the format, punishes a lot of the archetype’s cards that see a lot of play.

There are a lot of different potential builds, and in the coming weeks I’ll explore those builds in preparation for the Kamigawa: Neon Dynasty Set Championships.