Much like last week, we have even more Dominaria United previews to sort through. This set looks awesome and reminiscent of a set like Invasion. Let’s take a look at more cards that look interesting. 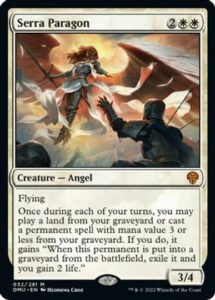 This is a sweet card that when unchecked in play will have a small snowballing effect of producing permanents out of your graveyard. While we’ll have to see just how deep we can self-mill with various colors, this card looks moderately interesting as a top-end in older formats because you can play it and put a land into play immediately. Strip Mine and Wasteland look fun for something like Cube, but it’d be more realistica for a competitive format to bring back Urza’s Saga more often.

While Serra Paragon is no Lurrus, it has potential if you’re able to use it as the top-end in a deck as a way to fight a resource battle. I think this card will definitely see play. 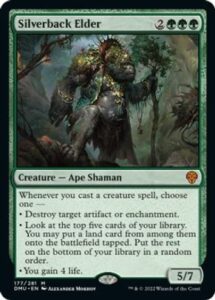 This one is a big swing and a miss for me. While the card has a powerful effect, it’s hindered by not having a good way to protect itself outside of its high toughness and it doesn’t produce value as it enters the battlefield. It almost looks as if it should produce the same type of trigger as it enters the battlefield to earn that mythic rarity, but alas it’s likely a card that will see fringe play against specific decks rather than be a card that can be played on its own merit.

It can be nice as a tool against Mono Red, but it seems worse than other options in all formats. Between Cavalier of Thorns, Thragtusk, and Workshop Warchief, I’d put this at the bottom of that list. 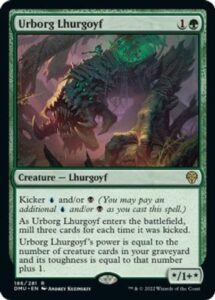 I’ve seen a bit of excitement around this card, and I always ask myself the same question, why?

Don’t get me wrong, there’s some potential for this in very specific archetypes as a set-up, but this is no Tarmogoyf. It’s a much different card. Your decks with this card will need to have a fairly heavy creature count, but they’ll also be looking to get cards into your graveyard for some kind of explosive turn down the road.

If you’re able to play both kickers and have a long-term graveyard game plan, then milling six cards is a lot, especially while you’re able to add a big creature to the board. However, I’m not seeing this for anything more than some fringe play in very specific archetypes that get incredibly punished by cards like Unlicensed Hearse. 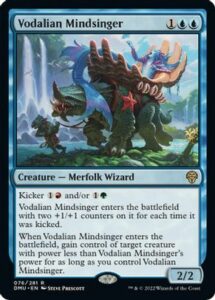 I love this card. It has such a sweet design. Many versions of this type of card have existed and almost always they see some fringe play. This one is the weakest of the bunch because it does a terrible job of stealing creatures from a deck like Mono Green at five mana, as 4/4 likely won’t be big enough to steal the best creature. I think this card will still see some fringe play since its four toughness at five mana can help it survive a variety of removal like Strangle.

It likely won’t be a format staple, but rather a Limited bomb and nice sideboard option for specific match-ups. 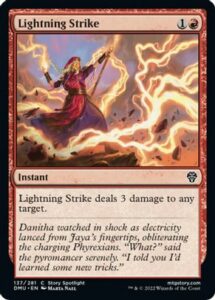 I was in utter shock when I looked down the list of previewed cards and saw this. It wasn’t because it’s overpowered, but because I hadn’t heard anything about it, and I usually see an uproar on social media when a fan-favorite card, such as Lightning Strike, returns. The coolest thing is it’s a common, which signals a high-powered Limited format.

Lightning Strike will certainly see play in Standard and has the potential to be a format staple. With Pain Lands back, life totals will be a little easier to burn down to zero, and more aggro decks will be viable and looking to gain that extra reach from a card like Lightning Strike.

The current variety of red removal makes deckbuilding exciting for Standard’s early stages, and Lightning Strike may be the most prolific red removal spell we see because it can steal games. 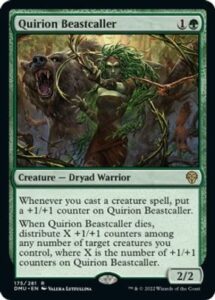 I’m not a fan of this card. Quirion Beastcaller, if left in play for an extended period of time, can become large and powerful, but it has a few big problems. It’s weak to removal in the early game and isn’t a particularly good top-deck card in the late game. It provides no value when facing sweepers and asks you to play into them. I don’t think this one will see much play. 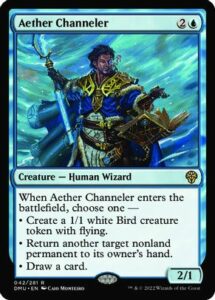 This is one of the better Man-o’-Wars we’ve ever seen. I actually like this card some and think it may have some playability. It’s a nice follow-up to Fable of the Mirror Breaker, my pick for what will still be the best card in Standard after rotation. It plays nicely with it, as well.

I can’t call it a sleeper because people got a little too excited about it. This card has potential, but it’s certainly not a slam dunk. 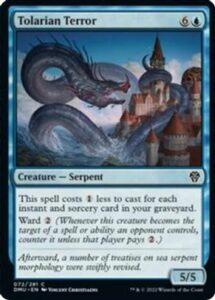 We’ve seen cards like this before with Cryptic Serpent, and these cards are no Gurmag Angler or Murktide Regent. Delve and this cost-reduction ability are not in the same ballpark. Without Fetches contributing free mana and cards like Mishra’s Bauble and Street Wraith, we’re just not playing this fast enough.

This is a nice budget option for some decks heavy in cantrips and while I think it may fall short in most constructed formats, it looks like it could see play in Pauper. I’m not too high on this one, but that it’s common will make it a sweet draft around. 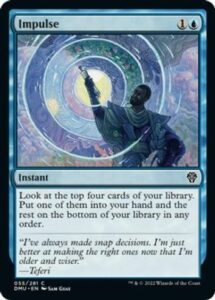 I’m glad they reprinted such a sweet callback. There’s no format that I think this card is too good, or even good, in. I anticipate it’ll see little play, and Impulse shouldn’t be too different other than potentially fueling decks that want to fill their yard.

We’re getting this card in the same set as Joint Exploration, the ladder of which is going to be better in decks that produce green mana. While I love the callback, I think this card falls short in basically all Modern MTG formats. It’ll likely see some play early until people realize you can’t fill your deck with air and spend two mana on card selection spells in abundance.

Drag to the Bottom 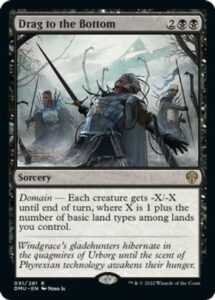 A Radiant Flames of sorts, but this card looks fantastic to me. In three-color decks we’ll get a full-on Languish, and may find some use even in two-color decks like Drag to the Bottom. This is a solid black sweeper that I expect to see a good amount of play fueled by Triomes. 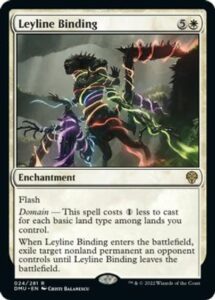 Also fueled by Triomes, Leyline Binding is a staple in almost all formats moving forward. I’m least excited about it in formats like Standard where it will be harder to make it cost one or two mana, but it will see tons of play in various Modern decks where cards like Prismatic Ending and March of the Otherworldly are played in high numbers.

Leyline Binding avoids Cascade in decks doing that, but even at three mana this card may see some play. 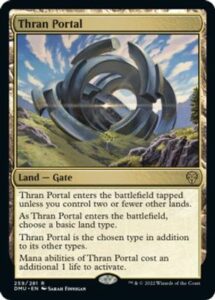 This card looks fine. I was a little curious why Mana Confluence is out of bounds, as that would be an excellent reprint while this is a worse version. The obvious answer is this will count towards Domain, and aggro domain could be on the table.

Aggro decks have long been forgotten or pigeon-holed into mono-color decks for far too long. Now, we have Thran Portal and Pain Lands from this set allowing for solid mana in the early turns for multicolor aggro decks.

I like including a card like this to boost those decks, especially when we have a set full of Tribal Lords to try out. This is a sweet printing that probably won’t see much play in your traditional midrange decks. It may see a few in small numbers because in addition to fixing for your own colors, you may use this to reduce costs of Domain spells for colors you can’t otherwise produce and to fuel kicker costs of colors outside of your deck’s scope.

It’s a cool card, but bring back Mana Confluence you cowards. 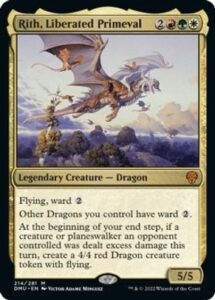 Everything about this card was done just right. They gave the preview to Brian Kibler, and it’s fun and unique.

Ward 2 is a strong ability for a 5/5 flying creature, even at five mana. This card will go well in decks with creatures with high power and low toughness. If you’re able to swing your 4/2 creature into a 2/2 and follow-up with Rith it’s backbreaking. The uncertainty of getting that trigger may make this card a bit worse, but if Naya decks open up, I think this card has a shot at seeing some play depending on the play patterns of the format.

We’re not used to tracking this type of ability, so it will be interesting to see if this card is able to trigger enough to see play in Constructed. It only takes triggering once for this creature to be incredibly strong.

Dominaria United may not be the most powerful format, but it’s very deep. I still have a list of cards I’d like to go over and we’ll continue that next week. After that we should finally get our hands on the cards and my Worlds testing will begin. See you next week!