Kamigawa: Neon Destiny is now upon us. The week has been full of new spoilers. We continue to see new cards and how they can be inserted into the current format. 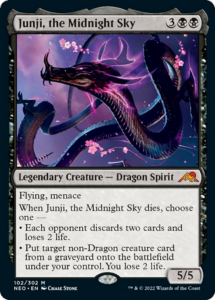 We begin with the latest dragon that was still unconfirmed last week.

Junji is probably my favorite among the five, and I’m sure it can find a place. For five mana you can make a 5/5 flying menace, and when it dies it either makes your opponent discard two cards and lose two life or it puts a non-dragon creature card back into play from the graveyard.

It’s a strong card that shares its slot with Loth because they have the same mana cost.

With the emergence of decks like Orzhov Control or Jund Midrange, I am sure that this card will be at least tried in these archetypes. 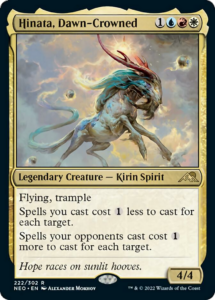 I get the impression from the debut of cards like this that a Jeskay Control full of nice spells is coming.

Four mana for a 4/4 flying trample that makes spells cost one less for each target and your opponent’s spells one more for each target seems okay to me. Of course there is currently no deck that can exploit the potential, but it could be built.

The removals are certainly not lacking, so with a minimum of four targets and maximum of six Magma Opus  is the first card that comes to mind that could provide excellent synergy.

What is definite is that this card will be used as much as Jeskay Commander. 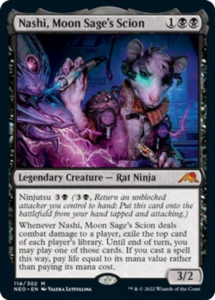 This is another interesting card. For three mana you have a 3/2 (which also has ninjistu 4) that exiles the first card of the deck of each player when it inflicts damage.

You can play one of the two cards paying life instead of mana. In decks that could become played, a card like this that gives a good value to decks that hardly make card advantage and that tend to run out of cards in hand is always good, though it’s harder to see in the various Jund Midrange or Control.

The weak point of this card is its two in toughness, which must be accompanied by a good number of removal and board control. Regardless, I think that it may have a chance at seeing play. 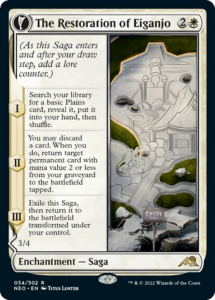 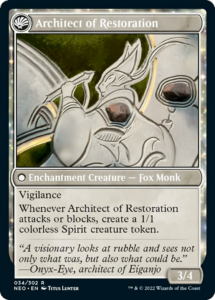 The Sagas have a new form in this expansion—they flip to become a creature when they get their last Lore Counter.

This one could have potential. At three mana it takes basic plains (The Birth of Meletis taught us that this is a strong move).  The second ability discards a card and puts a target permanent that costs two or less from your graveyard to the game tapped (so even a land).

Its final ability turns it into a 3/4 with vigilance that makes a 1/1 spirit token when it attacks or blocks.

The card could be played as a control card in Esper/UW Control, though I don’t exclude using it in midrange in decks like Naya. It’s harder to see in aggro since it seems to be slow.

BLADE OF THE ONI 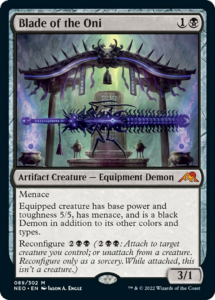 Another card for Mono Black? Possibly!

For two mana this is a 3/1 menace, but for four mana it can attach to a creature and turn it into a 5/5 demon with menace.

Why do I think this card has potential? Because it has what I want from a creature in an aggro deck. Although one toughness is not much, it’s evasive and can inflict damage in the early game

In late game, where the board may be blocked, it turns a creature into a 5/5 with menace that needs to be blocked by at least two other creatures.

In short, it can generate good advantage, and unlike other typical aggro cards, it’s never a bad draw.

Looking forward to seeing where these cards land when tested and played? We’ll definitely write about what we find in a future article!