We’ve spent time talking about Standard, a format that is waiting for a breath of fresh air from the rotation. Now we’ll talk about the Modern Metagame, currently the most varied and fun format, and see how the format has evolved since the release of Modern Horizons 2 a month and a half ago, and what decks are playing best in tournaments.

I wrote an article extolling this deck’s qualities when it was unappreciated and at the bottom of the meta. Hammer Time is now the deck to beat and is the most played online because the cost isn’t too high and the gameplay, while not easy, isn’t that complicated. 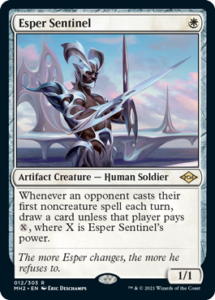 The list has evolved this month and includes new cards while excluding some old cards. Esper Sentinel’s absence stands out, but it probably was too slow in this archetype. 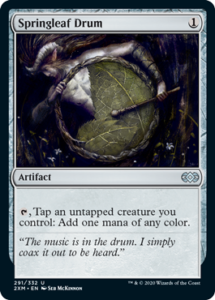 Springleaf Drum is another card that lost its place. It allows for explosive starts but lacks synergy in the deck. 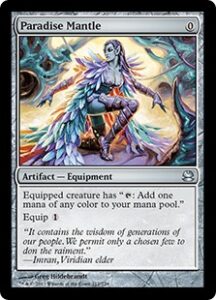 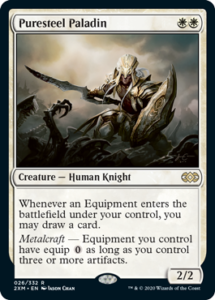 It’s better to play Paradise Mantle after Puresteel Paladin, so you can also draw a card. 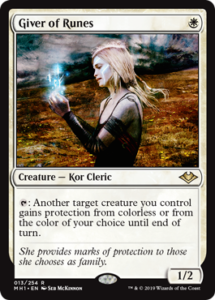 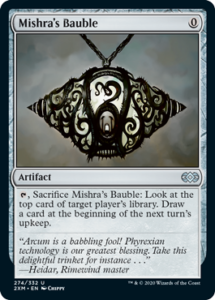 Giver of Runes was also cut for being too slow. Mishra’s Bauble takes its spot and finds a perfect place in decks that play Lurrus of the Dream-Den thanks to the recursion they create together. 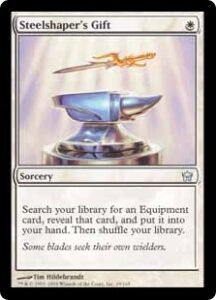 Steelshaper’s Gift increases to four copies and increases the number of equips in the deck. 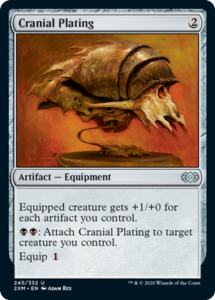 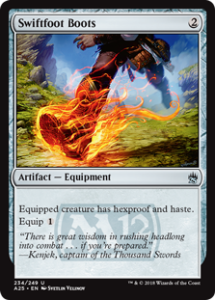 Cranial Plating and Swiftfoot Boots are the big new entries. The former puts pressure on the board, and the latter defends creatures and makes them fast, which could be very important. 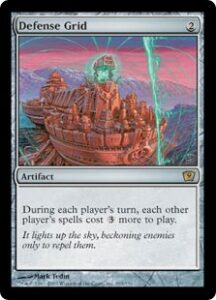 In the sideboard, Defense Grid is a great solution against Izzet Regent, which is the second most played deck in the Modern metagame.

Here is the natural evolution of Izzet Blitz! Although the aggressive version of Izzet Decks is still playable and competitive, this new, slower version is shining, thanks to cards like Murktide Regent and Counterspell, recently included in the format with Modern Horizons 2. 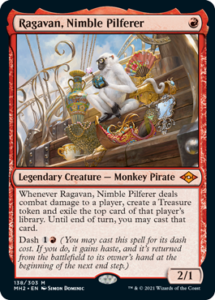 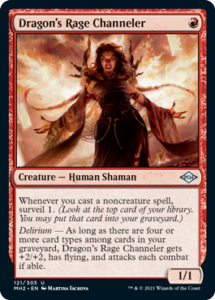 Ravagan and Channeler provide strong starts and put pressure on the board. Ravagan provides card quality and speed for mana, while Channeler manipulates the top. 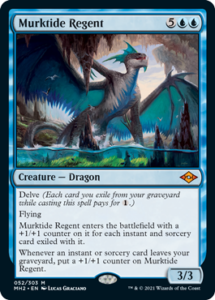 The real MVP of the deck will probably turn out to be Murktide Regent, a creature that seems to be printed for this deck. With two mana you will make an 8/8 that is hard to handle by any deck. 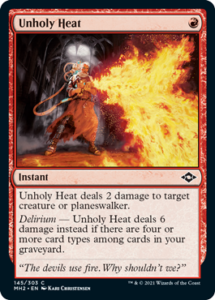 Unholy Heat may seem like a less important card, but it is perhaps one of the most important among the new arrivals. It has the dual function of both cheap removal and a solution to Planeswalkers, which is something that the deck lacked before. 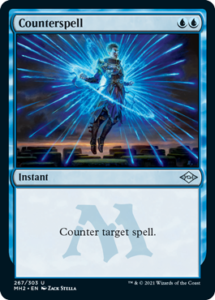 Counterspell doesn’t need any introduction, as it’s one of the strongest counters in the history of Magic. It can easily find space in a deck like this and protect one of your threats or deny your opponent the opportunity to develop their board-state.

Overall, the deck gives the feeling of an incredible solidity. It’s able to solve any board and have the situation under control. The high ability to manipulate the draw allows you to almost always find the right solution at the right time. I recommend this deck to those who love this archetype.

Here’s another deck that little by little has climbed the Modern metagame’s hierarchy and has established itself as one of the best decks. It’s the right compromise between a midrange and a combo. It’s gained less than other decks with Horizons but has still gained important cards. 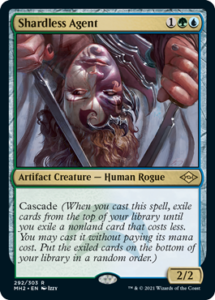 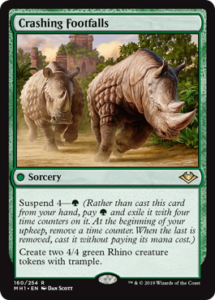 Shardless Agent has always been played in Legacy, which makes its entrance powerful in Modern. It makes a 2/2 and two 4/4 in turn three while dropping Crashing Footfalls, which could be difficult for any deck to handle. 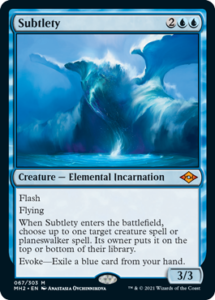 Subtlety is the other addition for this deck. It’s a versatile card found in many decks. Delaying a Teferi could be decisive and this elemental allows you to do so even when you’re out of mana. 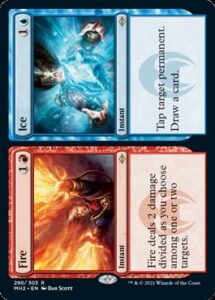 We close with Fire/Ice, another iconic Magic card, which makes a great debut in Modern. It’s useful as a cheap removal card and as a tempo card. As Hammer Time, Ragavan and Dragon’s Rage Channeler are the most played strategies, Fire/Ice, together with Bonecrusher Giant, can answer these threats. 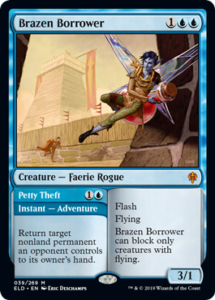 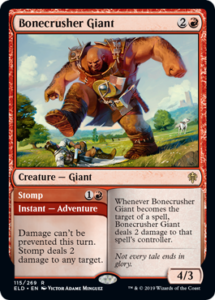 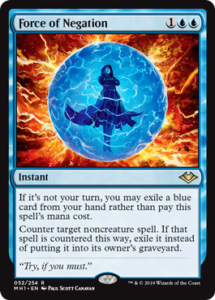 The deck plays only strong cards. Brazen Borrower and Bonecrusher Giant have monopolized not only Standard and are often seen in this format. Jace, the Mind Sculptor needs no introduction, as well as Cryptic Command or the ever-present Force of Negation that is present in almost all decks that play blue since it was released. 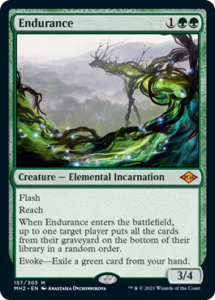 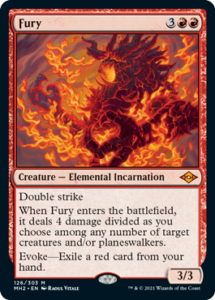 There are two new cards on the sideboard. Endurance had some doubts at first but has gradually found more and more space thanks to the large number of decks that use synergies with the graveyard. Fury is a free removal that in certain situations will be the difference between winning or losing a game, that someone has started playing it even in the Main Deck.

This isn’t the most innovative deck in the format. The archetype has seen plays since Modern exists, however like any other archetype, it has changed and adapted to the current Modern metagame. 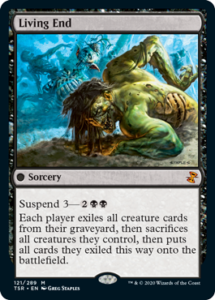 You find the Living End archetype in a Blue version, thanks to Force Of Negation that you’ll find in all decks that play this color.

Leaving aside cards with cycle, which only have the function of being reanimated with Living End, you find something new in Grief, which makes its debut in this deck and makes things easier since it acts as a discard spell and makes play more relaxed. This also protects from Teferi, Time Raveler, which would destroy the deck. 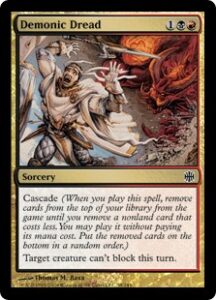 Shardless Agent is the second 4x with cascade, but unlike Demonic Dread that was played before, it gives an extra 2/2, which always has some use.

A format full of creatures is a perfect field for Living End lovers, making this a great time to play this archetype.

The Modern metagame is constantly evolving, and everything changes from week to week. I recommend everyone give the format a try because the fun and variety of decks makes it worth your time.

Attack Modern from a Different Angle

5-0 with a bit of Creativity