This week we’re switching gears to talk about Standard and the imminent release of Adventures in the Forgotten Realms, which I’m hopeful will give a breath of fresh air to a static format.

We’re looking at the top 10 most interesting cards that may find space in the current meta, but also remembering that the format will rotate in a couple of months and that everything is bound to change. 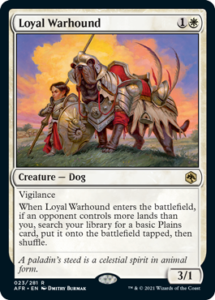 If you’ve been playing since Magic Origins, this card reminds you of Knight of the White Orchid. This card isn’t bad, but its ability to put a tapped Plains into the battlefield is not as effective as the Knight of the White Orchid’s first strike that puts an untapped land. It’s not little for an aggro deck given that it’s two mana with 3/1 vigilance and you can still put a tapped land into your battlefield.

If Mono White is still competitive after rotation, Loyal Warhound could take the place of Drannith Magistrate and Seasoned Hallowblade as the two-drop to be played in White aggressive decks. 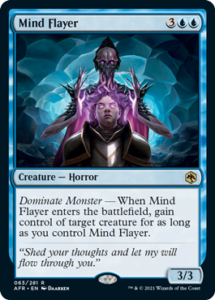 While this card survives against Bonecrusher Giant, it would have been much stronger if it had been 4/4 because it would’ve also survived against Frost Bite and Fire Prophecy.

It’s a side card that I’m sure we’ll see in Prismari Midrange and Jeskai Tempo to provide an extra answer against Lovestruck Beast in the Naya Adventures match-up. I don’t know if Sultai Control can play it as well, but it seems more difficult because turn five has stronger plays, such as Shadow’s Verdict or Elder Gargaroth. 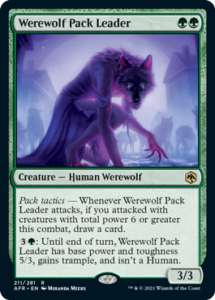 Will Mono Green make a comeback in the format? Will a card that finally has card advantage be enough to make a formerly competitive deck competitive again?

This card seems like all that was needed for this archetype: a two-drop with a good body and the ability to increase card draw to keep your cards plentiful, which is essential because there is nothing else that gives this advantage, with the exception of a version of Vivien (a card that I would always play at least two copies).

It’s a good starting point for the remaining months. Mono Green may not exist post-rotation, but it’s likely it will since high-power cards like Lovestruck Beast and Questing Beast are irreplaceable. 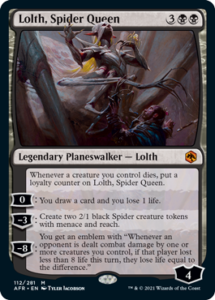 Not the best Planeswalker in history but a playable card nonetheless. It doesn’t have abilities that increase its counters as part of its costs, however its static ability increases counters when a creature dies.

This could be positive if you play it in a deck that develops the board or negative because it decreases playability.

The first ability makes you draw a card and lose 1 life. This is good since it gives you resources, which is especially helpful in midrange decks that always need resources.

The second ability is a defense that could be more solid, however there are always two blockers that have reach, and you can push damage with Menace in the right situations.

The emblem is mediocre compared to what it takes to complete. It could do more, so it won’t be included in the card’s final evaluation. 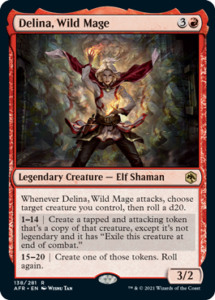 Evaluating a card that works by rolling the dice is complicated because its effectiveness ranges depending on your roll. I proposed this one because its effects are good, even if its body is weak for a four-mana drop.

You throw a 20-sided die when attacking with this elf shaman. If you roll 1 to 14 you will put a token attacker that will copy one of your creatures until the end of the turn, which can be helpful, especially if you copy a dragon.

If you roll 15 to 20, which is more rare, you put a token that stays on the board and you roll the dice again.

5)INFERNO OF THE STAR MOUNTS 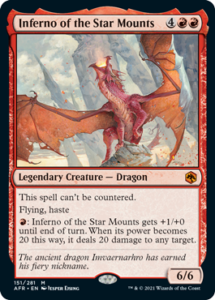 The six-mana cost is not too high, its 6/6 is an excellent body, and like other strong dragons, it possesses flying and haste.

The card’s +1/0 ability is average. You will only be able to do 20 damage in difficult cases.

At first I thought of an Unleash Fury combo, but then I realized it must be 20 power exactly. You should be able to pump Inferno three times, double the power, and then pump it twice more, which seems unlikely to happen.

Embercleave is still in the format, and wouldn’t you be happy to attack with a legendary dragon holding a legendary sword? Priceless. 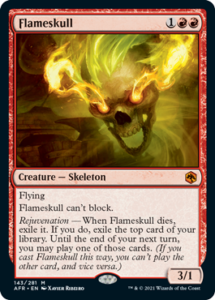 This looks like an improvement on Phoenix of Ash, as it’s a three-mana 3/1 flying that can’t block, but it’s unlikely you’re looking to block if playing this card.

You can exile it when it dies, and you would also exile the first card in the deck. You can choose to play either of them until the next turn, so you get time to manage your mana.

Unlike Phoenix of Ash, it doesn’t need cards in the graveyard to return to life, and it opens many scenarios during its death by giving you a choice. For example, maybe you need a land and it exiles a land, or you find an Embercleave that you wanted.

This is suited for the side but can still carve out a space for itself, even in the main deck. 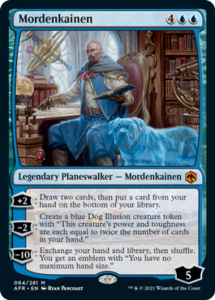 This Planeswalker has all the qualities of a good control card. With six mana, it enters at five and immediately goes to seven with the +2 that allows you to draw two cards and put one from the hand at the bottom of our deck. Skill, advantage, and card quality are essential in a deck that must keep the whole board under control.

The ability to defend is what makes a Planeswalker better than another. Its -2 puts a dog illusion token that is x/x where X is twice the number of cards you have in hand, which is big.

The endgame allows you to exchange your deck with your hand and have no limit of cards in your hand. If you manage to lose the game with the deck in your hand, then it means that you just couldn’t win that game. 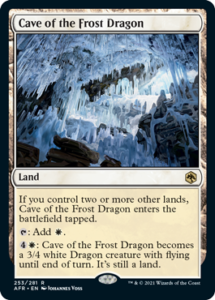 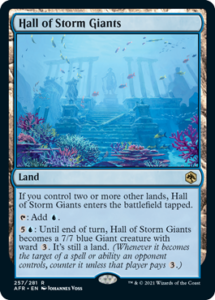 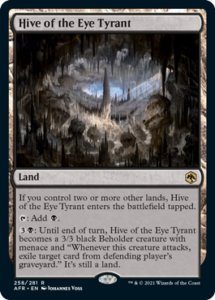 Lands that become creatures have always been played. Some were stronger than others, for example Celestial Colonnade being stronger than Lavaclaw Reaches, but they are both widely played.

These new ones seem playable because they enter untapped when played in the first two and are good even in aggro (for example, Red Earth). They provide closures even to slow decks like the UW control deck that remotely resembles Colonnade.

I like the blue land least because I’d prefer not to use 6 mana to make a creature that lacks evasiveness in a constructed game.

The black one is below the red and white ones but better than the blue one and definitely playable.

Except for the blue one, I think the others will see a lot of play in quite a few decks. 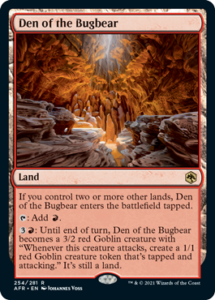 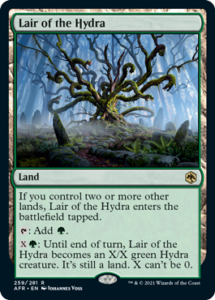 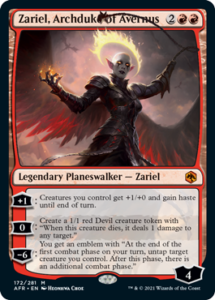 I’ll go against the grain with this card and say that I like it and am convinced that it will have a place in Standard.

It’s a Planeswalker with 4 mana that enters with 4 counters, which has a +1 ability that gives +1/+0 and haste to almost all your creatures acquired the following turn. This is good in a deck like RG because it makes any creature an instant threat.

Zariel is a playable Planeswalker because it can defend itself with its zero ability. It creates a devil token that could deal damage to any target when it dies, potentially keeping the game under control.

Finally, the emblem is not decisive, but it has a more powerful effect with Embercleave, and with Goldspan Dragon, it can give you two treasures and four mana.

On the whole it is a very playable card.

There is a lot of hype for this expansion, and it’s one of the most unique in Magic’s history.

I can’t wait to draft it and start playing Standard!