While the MPL/Rivals season is coming to an end with the gauntlets around the corner, I’ve decided to explore the Dungeons of the Forgotten Realms rather than go hard too early preparing for the MPL gauntlet.

This Limited format certainly doesn’t live up to the high bar set by Modern Horizons 2 if you’re a Limited lover. As stated before, I think it’s better than most Core Sets, which this set basically replaced on the release schedule. While Core Sets can be fun for a little bit, they generally lack the depth to be interesting for a long period of time.

Adventures in the Forgotten Realms introduced two pretty controversial mechanics with dice rolling being a prevalent feature, and of course, dungeons. I was skeptical of both mechanics but have enjoyed both with dungeons being the cooler design. 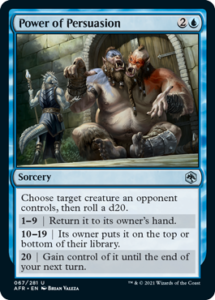 While dice rolling in itself is an Izzet deck archetype, most of the dice rolls are low impact. Cards that let you scry deeper or make you an extra token will rarely decide the game, and when they do it’s an enjoyable sweat. Power of Persuasion is the most tilting card, since rolling a 20 could be the worst outcome, which is a weird design. My best guess is it gained control of the creature at some point and got switched to until the end of the next turn. If you’re really good at persuading your enemy to join your team, wouldn’t they stay?

As for dungeons, I found the discussion and decisions about which dungeons to enter to be interesting game strategies and have seen great players disagree on what dungeons and when to enter. It’s a cool mechanic, even though I believe it will remain in Limited. 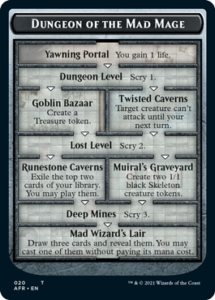 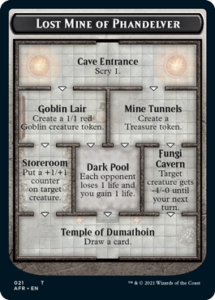 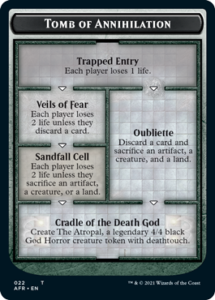 This Limited format is combat centric and not high powered. There’s a lot of set-up for combat with tricks and for defense with cards like You Hear Something on Watch. In this format it’s important to play on a curve, because falling behind on the board is an easy way to get run over. There are many cards that are better on the play so having plays on early turns is crucial. Cards like equipment tend to be better on the play, since their biggest hindrances are their expense and clunkiness, so it can quickly snowball if you give your opponent free turns to spend mana to equip things. The same is true for creatures that provide value when they connect. Examples are cards like Shortcut Seeker, Hoard Robber, and Soulknife Spy. Peak Tactics is an ability design that is also better on the play than draw, as you’re most often on the front foot and attacking on the play. 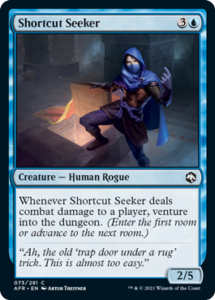 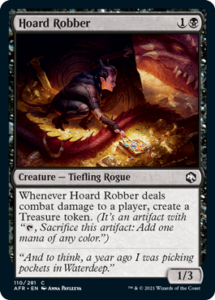 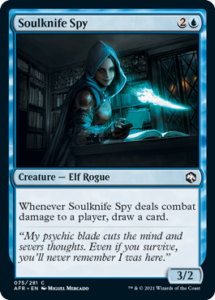 As for how to draft the format, I’m biased to a few favorite archetypes. 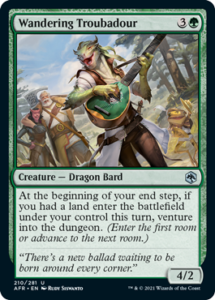 I believe BR Treasures, BW Ventures, UR Dice, RW Equipments, and UW Venture are my favorite archetypes to draft. They are linear and push you into doing a very specific thing. I also like Green-based Venture decks if I get a lot of the good uncommons, especially Wandering Troubadour, which is my early pick for most underrated uncommon. I’ve literally not been Green, pack two or three had to pass a pair and ended up wheeling two and moving into Green or splashing them on several occasions. This is a card that can finish a dungeon on its own and has battlefield presence at a reasonable rate with no additional mana cost.

I’ve read some discussion that venturing should be overlooked and is only worth it if you’re going hard. I agree, but you should be decisively going hard on venturing. While small bonuses for venturing don’t seem like much, entering the Dungeon of the Mad Mage and completing it isn’t hard if you have a pile of commons and a few uncommons. You end up drawing five cards with a bunch of scry and other small values along the way. In a game of Limited, drawing five cards and casting one of those spells for free is obscene, and I’ve been able to do it fairly regularly, even without a bunch of uncommons or rares. 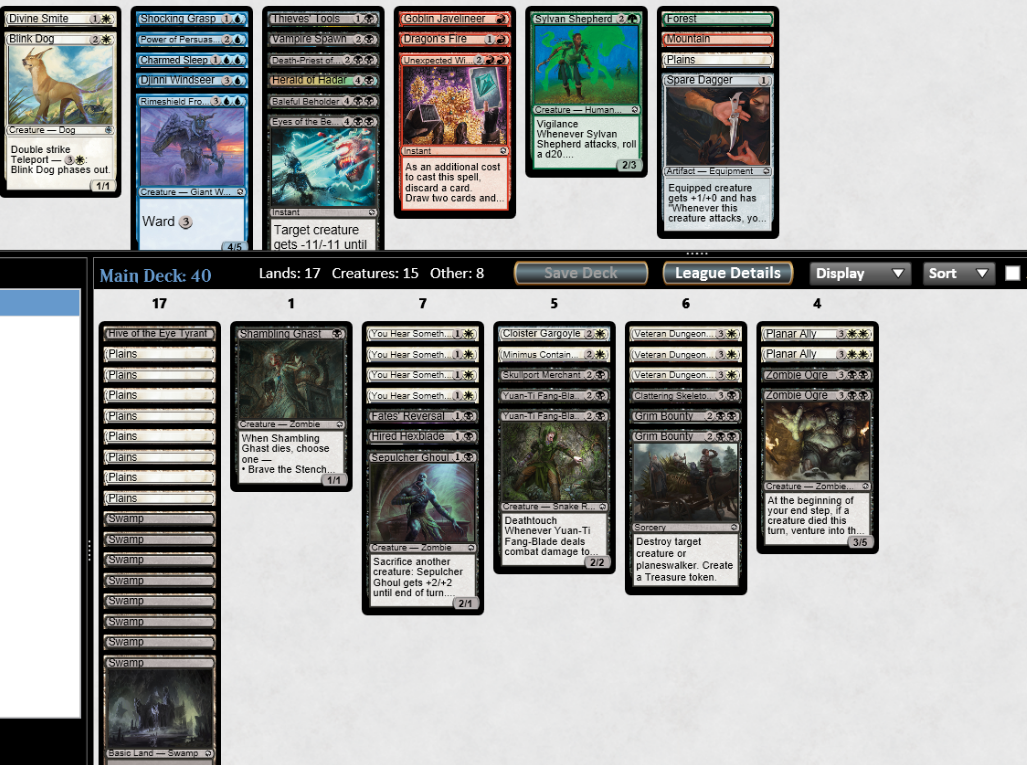 4
You Hear Something on Watch

This deck was focused on entering the Dungeon of the Mad Mage and was successful in completing it in almost every game I played. It only has two or three uncommons and a single rare, which is a land. This is an average version of the deck, but it performed rather well. 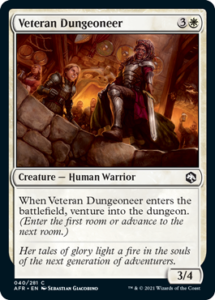 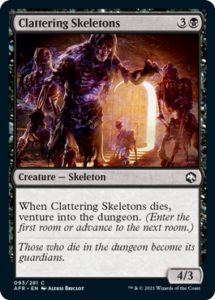 For the most part, the power level in this format is low. The creatures are a little below on what we’d consider normal for today’s standards. While there are some outliers, having a bunch of scrappy creatures and mediocre removal can go a long way with drawing five cards by midgame because each of your average creatures advance you into the dungeons. 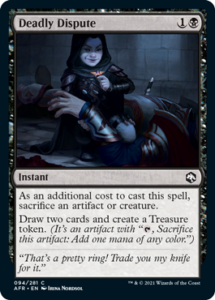 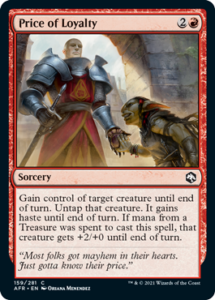 BR Treasures is my pick for best archetype, as it has access to a lot of value, good synergy, and good removal. Deadly Dispute and Price of Loyalty are two of the major reasons this archetype is so good. Both cards are surprisingly easy to set up and great in combination. The archetype is deep because you can pick up high value cards with the seventh and eighth pick and occasionally wheel them.

Here’s an example of a solid BR Treasure deck I drafted: 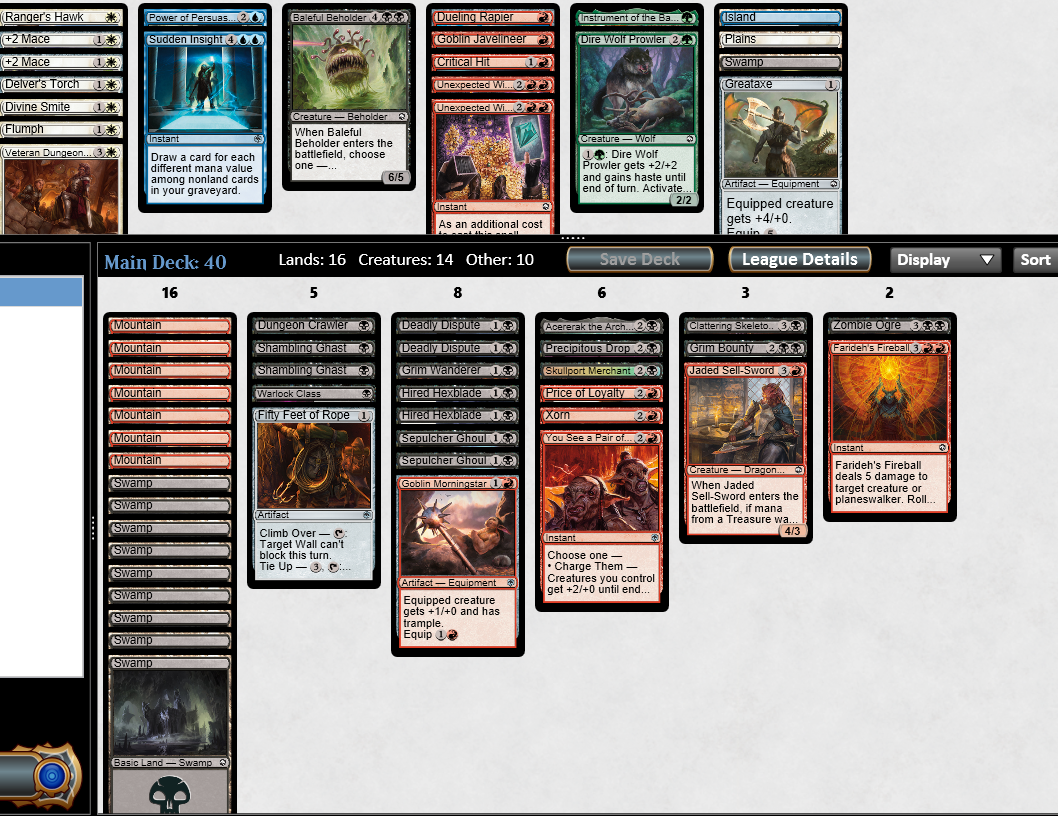 This is a lean curve — aggressive creatures with a side Venture theme to pick up a goblin or treasure token when needed or drawing Acererak the Archlich into Tomb of Annihilation. Again between the Treasure theme and the Sacrifice theme the deck just has a lot of built in cross synergy that works really well together. 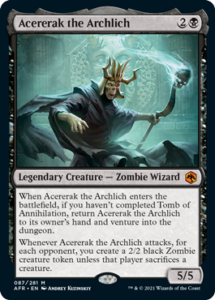 Almost all the archetypes are reasonable in this format. I’d steer away from GW Lifegain and UB Rogues, or whatever it’s supposed to be, doing the most. The support isn’t great for either.

As a combat centric format, Adventures in the Forgotten Realms is pretty fun. I’m not too big on formats that force you to play and worry about the board, but this one is more balanced and fun compared to similar sets. There are enough decisions and synergies to make me feel like what I do matters.

That said, this is an average Limited set for me held down by the overall low power level. There have been quite a few fantastic Limited sets over the past few years, and I hope a scale down for constructed power doesn’t bleed too far into Limited’s design. If you’re skeptical and worried that this set isn’t for you, I’d recommend giving it a couple of drafts and seeing if your mind changes. I played and enjoyed the set more than I thought I would, and I think you will, too.